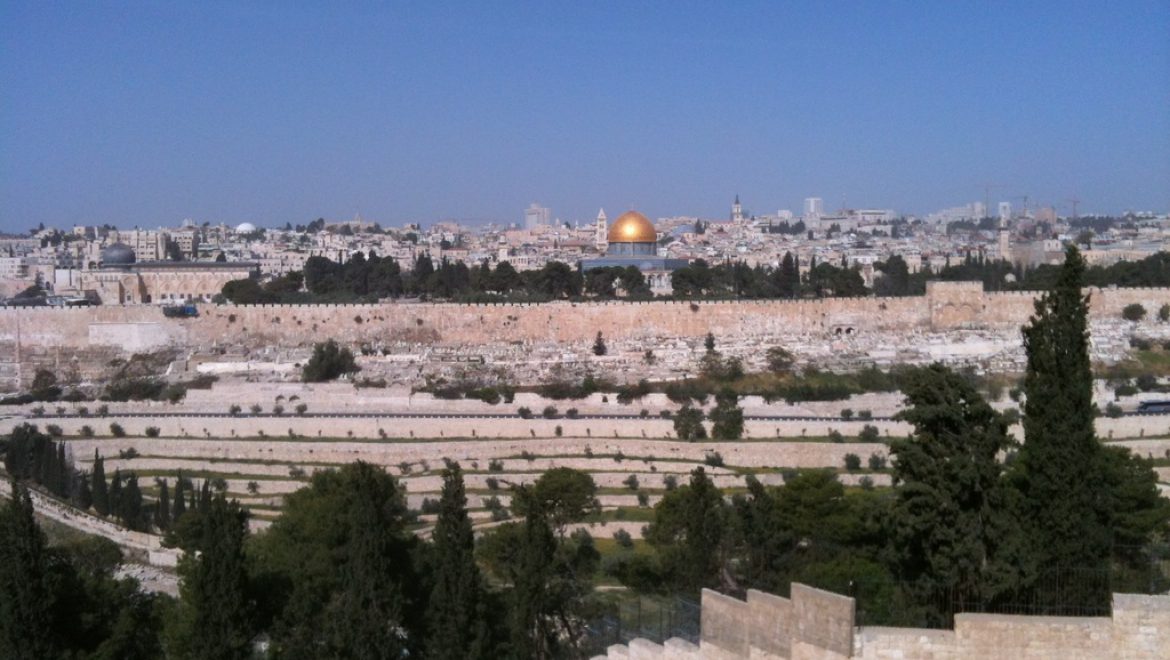 From the Jerusalem Insiders' Guide website, this article provides a comprehensive introduction to the Armon Hanatziv Promenade, including a detailed description of the panoramic view and a survey of the historical significance of the area from biblical through modern times. To see the full article, which includes information about tours and activities at this site, click here.

The Haas Promenade is one of the best places to start a tour of Jerusalem. This panoramic viewpoint offers a sweeping view of the city and, in true Jerusalem fashion, is itself replete with thousands of years of history. The promenade – popularly known in Hebrew as "the Tayelet" – actually comprises several walkways: the Walter and Elise Haas Promenade, the Richard and Rhoda Goldman Promenade and the Gabriel Sherover Promenade. From the heights of these landscaped walkways and parks, you can enjoy the full splendor of the city of Jerusalem spread out at your feet.

Stroll along or rest at any of the observation terraces, from where you can see the City of David, the Temple Mount, with the Noble Sanctuary (Dome of the Rock) glittering in the sun; the pure white dome of the re-built Hurva Synagogue to its left; the Mount of Olives, with its spire of Augusta Victoria Hospital reaching for the sky. Slightly behind it, you can spot the tower of Hebrew University on Mt. Scopus.

On the other side of the Old City, the buildings of Mt. Zion are clearly visible, along with other more modern landmarks, such as the King David Hotel, Jerusalem's famed luxury hotel with a fascinating history of its own and still visible between some new skyscrapers, the tower of the Jerusalem YMCA.

The view is especially resplendent in the glow of dusk, when Jerusalem's white stones shimmer with a golden hue.

There's more to this area than simply the view – although the view has played a part in its history. The high ridge along which the promenades run lies to the south of the city. Today is called Armon Hanetziv – the palace of the commissioner – for the residence built here by the British in the 1930s as the home of the High Commissioner. But its first mention may be in the Bible:

Tradition has it that this is the place from which Abraham saw the mountain where he was to bind his son Isaac. (That mountain is Mt. Moriah, the Temple Mount, clearly visible from here.) The Armon Hanetziv ridge is the first from which the Temple Mount is visible when approaching from the south.

More than two thousand years ago, in Hasmonean times, an aqueduct was built that brought water from pools in Bethlehem to Jerusalem and the Temple. The aqueduct and water shafts dug through the rock still exist, and it is possible to walk through some segments of the shafts.

Today, this is an idyllic spot for a romantic picnic, and amid the peaceful olive groves, it is hard to remember that ridge has been the site of historic battles. The strategic importance of these heights makes them extremely valuable to whomever controls Jerusalem.

In 1948, the British left the High Commissioner's Residence to the Red Cross, but it was later handed over the UN observers, who still use it today. During the Six-Day war, however, the Jordanians ousted the UN observers and took control of the residence and the Armon Hanetziv ridge, from where they could easily bombard the city below. The Jerusalem Brigade captured the residence, pushed back the attacking Jordanian army and from here were able to liberate the Old City of Jerusalem.

Since then, the area has been developed with the building of the Haas Promenade, the Sherover and Goldman promenades and lovely parks. It's become a peaceful oasis from which to meditate on the uniqueness of this wonderous city.